I can't believe that I haven't posted here since 2016. Though I've written many posts in my head I guess I decided:  No, I can't write that down. There  are some topics that I want to discuss, other topics that have security implications, and perhaps some of my ideas could destory the world--ha, ha, ha. Self importance? Exactly. As a reminder of some relatively safe topics, I should make a list--but I hate lists--especially chores. Writing blog posts, is that a chore? Definitely.

Who's this Merlin Mountain guy on that graphic above? Why did I think that was a good idea? Over the years, I've test-run many names for size till my fickle feelings turned to hatred. I have, at some time, disliked all my names, even my legal ones. Why would anyone blog under the name Mordus Merlin? Is it tactful or tactless?

Lately, when I walk down the halls at work, people run away, take a detour down an alternate hallway, or hide behind another person. My presence is that powerful--so I tell myself. Run, baby, run. You should be afraid. Yes, run away from this blog. Be afraid because if I'm feeling ornery today I might reveal some truth. Too much truth=cognitive dissonance. I've felt that a couple of times while reading internet pages. Ideas are crazy-dangerous; be careful with those insights.

Another issue is that great insights, if published, can be stolen then memorized by false gurus and operative/actors posing as experts on podcasts and videos. I may post my opinion about particular gurus another time. Who is real? Who is fake? I admit I am a bit fake. The name on this blog is not the name on my birth certificate. I am fake because I don't want to overwhelm you. I'm holding back. If you want more, figure it out, find it yourself. Beyond that, your head would probably explode.

Oh, yeah, dissonance. Should I have a go at that? I found myself, about five years ago, perusing the Internet till I became immersed in the Electric Universe ideas. I agreed entirely that electricity had been neglected, that The Big Bang was bunk, and that mainstream astronomy was moribund. Yet, why was I getting so dizzy while reading a paper that offered unorthodox theories about red shift? I had to stop myself and come back a few days later. I needed time to adjust to new thought patterns--but why?

Too many years of conditioning by the fake education system had etched The Big Bang and other lies into my thought processes. Astronomy as taught in schools is wrong, I've known that since 1976 when I took a university course for a semester. Astronomers believe that they are Sherlock Holmes using long chains of logic, but Holmes is a fictional character and today's astronomy is fiction as well. Chains of logic don't work in the real world. If a single assumption, one link in the chain, is false the entire chain is useless. Back then, as a student in my teens, I was both impressed and leery at the same time. How could astronomers know so much about distant pinpoints of light in the sky--stars,  galaxies, size, distance, stellar evoultion over millions of years?  I was skeptical so I read the textbook again, front to back, after the semester was over. Back in the seventies everything in that book felt wrong. Astronomers are still doing it wrong today; they haven't learned a thing; they just keep adding more links to the already rotten chain until today astronomy is one of the weakest areas of science.

Astronomers don't know what our own sun is going to do next week, yet they believe that they know what distant stars were like billions of years ago--is that hubris or genius? The truth is clumsy and changeable. Everyone prefers their lies neatly wrapped and well promoted.

Incomprehensible math is not science, it's millions of hours of wasted time, as thousands of scientists spend eight hours a day doing math based on incorrect assumptions about how stars and galaxies behave. Wasted year after year, decade after decade, professional careers destined for the dust bins of history: laughable, sad, almost criminal. Yet?

I've changed my mind, in recent years, about the societal effect of putting truth in the textbooks. Would the world be better off if the educational system taught more lies, more false assumptions? Is the truth too dangerous? Has tech run amok? Is everyone desined to soon become a member of the Cyborg Hive? Technocracy: hate it. Or own it?

Hide it. Return the truth only to those who are worthy.

thestarofdavid at 7 Planet Star of David 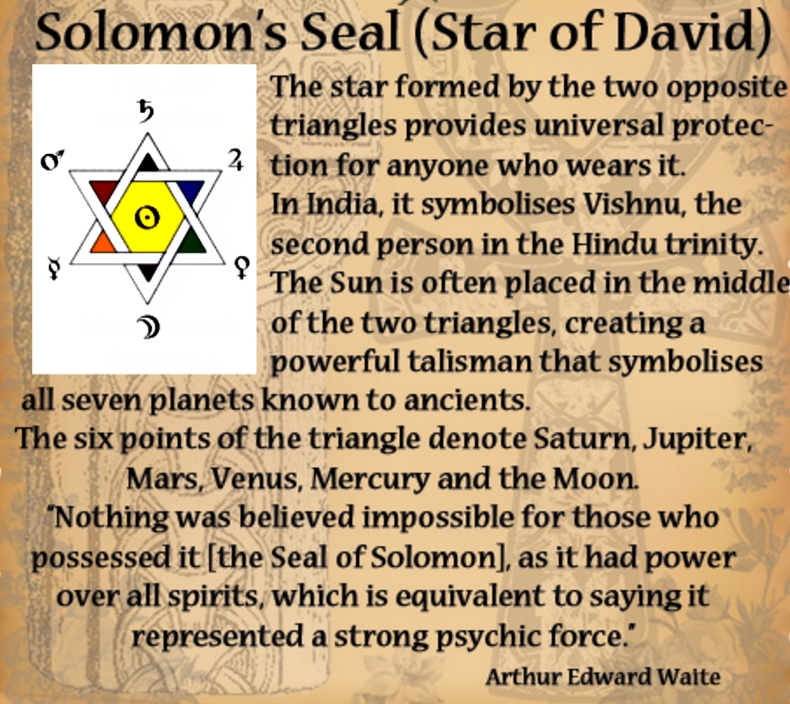 A friend of mine is having a problem with a fetch in her hometown. A pretty nasty one, by the sound of it, it's hurting people physically. (A shadow-formed fetch.) She's looking for "a formal counter-spell" against fetches, because she wants to send the fetch back to its maker, hurting only the maker and not anyone (human or animal) around the thing's maker to get hurt by it. So if anyone knows one, let me know in a comment, okay? Thanks in advance!

Well, first off, after spending the ENTIRE summer on medications trying to get myself safe enough for surgery, looks like my hysterectomy will be on October 5th.

For those who've missed the updates, I'm 34 and over Memorial Day weekend, I went into the ER in massive pain, only to discover my uterus is full of tumors. Literally pounds of them. So much in fact, I was unsafe for surgery. I have over $10,000 in hospital bills and trying to raise the final $600 I need for surgery. (Of a total of $2,600 total.)

I've been on UNPAID medical leave this whole time (my last paycheck was June 3rd) so trying to pay my regular bills has been a challenge, let alone raising EXTRA money for surgery.

So here's a look at what's new in my shop. Sales help me with living expenses, medical bills and surgery costs. All the info can be found here.

Even if you can't buy something, just passing on the link in your twitter, facebook, blog, etc. is greatly appreciated!

Thank you for your support!

I've added a few things in the past week or so to the shop and thought I'd just do a small post showing off the newer pieces.

As always, I appreciate any links, or tweets or wall posts, etc. of my shop and/or items.We're still about $600 shy of of medical fundraiser goal for upcoming surgery, so promotion and support is really appreciated!

Click any image to go to the listing for more information and how to purchase!

All items available in the shop along with many others. And, as always, custom orders gladly accepted!

I've been doing a lot of soul searching lately, and a whole lot more research, and practicing and testing of my own empathic and psychic abilities. But mostly research, which thus far has equated to me watching a great number of documentaries that deal with empaths, psychics, occultism, and tons of other forms and off shoots that equally deal with those topics. While there are many skeptics, at least half of all the stuff I have found has proven skeptical. The other half seems to definitely support the existence of empaths/psychics and components of extra sensory perception. While watching some of these documentaries, I had ran into the tale of "Edgar Cayce" who apparently, aside from being one of the best prophets/empathy/healers/hypnotist/regression therapists ever, started a foundation called the "Association for Research and Enlightenment", which holds all of his archives and a host of other stuff. The following link leads to thier web site, http://www.edgarcayce.org/ Whats more, the man actually founded a university in 1930 as well, "Atlantic University", which is as far as I know the only college or university in existence for psychics, empaths, or any other similar group. Aside form the obvious military ones. So my question is this, do any of you know of any other colleges, universities, or groups which offer courses and classes specifically for empaths/psychics, and those with any form of extra sensory perception? Not to insult anyone's intelligence here, but, just thought it should be known that in academia, the realm of e.s.p. is commonly referred to parapsychology, or in worse instances, the occult. Oddly enough, in most of the research I've been doing, I am finding more information about those with e.s.p when the documentary is about the occult, or magic, or secret stuff etc...anyone else have any info on this? Of course obviously, I havn't even begun to hit the books yet. One last question, how many of you who read this are women, how many are men, what are your thoughts on reproduction and its importance among those who are empathic, psychic, or possessive of any form of e.s.p.? Feel free to message me your answers if need be.

Looking for more to sink my teeth into ;)
Collapse